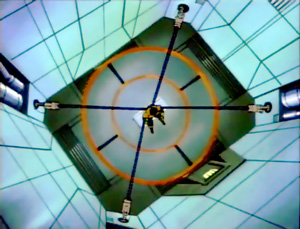 The PCs characters, Jokers or Aces have all been captured and taken to holding cells in the deep sub-basement of the headquarters of Rursus Aquam. They are being held in escape-proof cages that have a ‘power nullification field’.

Each PC vaguely remember the same thing – being captured and the image of a pair of ‘green glowing eyes’ invading their mind, then nothing.

Their personal possessions have been removed from them and they have been left wearing a set of orange overalls. Attempts to escape by ANY person from their cell result in activating EVERY cell’s defences. The roof is rigged to crush them to pulp if they refuse the offer that is about to be made and the cages can be flooded with a toxic gas as required.

Some of the group may be familiar to others – this remains to be determined through the course of the game.

A television monitor flares into life on a chest in the centre of the room surrounded by the semi-circle of cages. An unfamiliar symbol appears – a cloaked man standing in a small boat set in white against a black shield. White writing beneath reads: ‘Rursus Aquam’.

Once everyone is awake an electronic voice comes over the speaker:

“This is not a negotiation. You are here because you have no where else to go. You are deemed a serious potential hazard and we have been instructed to deal with you appropriately and with full jurisdiction. Your old lives are over but you may earn pardon for your past actions…”

If anyone attempts to break into a discussion they discover this is a pre-recorded message which does not pause.

A chute opens briefly in the ceiling and a metal tube drops onto the floor. When a prisoner touches it, a red light on the side flashes green and it opens to reveal a piece of silver paper.

The paper lists all personal details of each prisoner including their Dark Secret. It is a contract on the same letterhead as the symbol. As they read they note the contract has been pre-signed with their signatures – apparently by their own hand.

This infuriates the NPC no one knows, a large reptilian and he begins swearing and striking the cage roof. He receives an apparent automated warning on the speaker within his cage that if he persists, he will be terminated. He ignores this and his powers flare. His death is horrifying to watch and is designed to instil fear in the rest of the group and harden their resolve to either escape or comply.

The television continues: “To accept the contract, reseal the container and place it in the chute. You have one hour to comply.” At the end of the speech a counter appears on the screen counting down the hour. The still smouldering corpse of the dead NPC lies at the bottom of his cell.

If the PCs accept the arrangement, doors open in the front of the cages allowing egress. At which point their powers return. Interference with the remaining cells is mentally impossible. Refusal to participate will result in the death of the occupant by being crushed under the enormous weight of the concrete roof.

Once outside, there is no obvious exit from the room other than a large metal grating attached to one wall. This leads to a series of very old sewer tunnels. The lack of water has left a pungent waist-deep sludge that the PCs must push through before emerging in the main sewer complex. There they find themselves hunted by three albino alligators intent on making them a collective meal.

“The pain in the back of your head has receded to a dull throbbing ache and there is a strange taste in your mouth. You don’t remember a lot other than an intense shock lancing through your skull, and the paralysis moments before you hit the pavement. Men wearing military boots grabbed your prone form, popped a motorcycle helmet on your head, bound your wrists and feet then heaved you into the back of a vehicle, probably a van. The last thing you remember was a pair of glowing green eyes staring deep into your mind and then nothing.

“You awaken in a holding cell in a bright-lit room in what looks like a sub-level of a car-parking building. There are a series of cages similar to yours housing another five persons. A series of wires and pipes are connected to each cage and run off into the roof; you notice the low background hum of a generator. The cages are about eight foot cubes made of glass or plastic, air is being pumped in and there is a microphone set into the ceiling. There is no furniture but you can stand up. You are each wearing orange overalls with your surname on the breast, bare feet and hands. Nothing happens if you touch side of the cage or the floor, but there is an intense shock if you touch the ceiling.

“Aside from the other prisoners, you can see no one. The cages are set out in a semi-circle facing towards a low table on which is perched a large television set. If you yell out, the others can hear you. Once everyone is awake, the screen hums into life…”