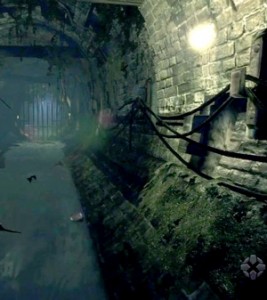 For those who came in late…

The PCs are captured and awaken in cages in an undetermined underground location where they are presented with a fait acompli: join our clandestine organisation and work for us or die. They accept and escape into the nearby sewer system where they are attached by several alligators.

The PCs exit from the sewer system into an old disused subway tunnel. Ahead is a dilapidated sign which reads ‘Port’ to the left and hand-painted in red: ‘Carnivale’ to the right. They decide to go towards the Port reasoning it to be the Harlem Port and not wanting to encounter what they believe to be an underground community of Denizen Jokers. Finding a breach in the wall next to a collapsed section of tunnel, they climb up a slippery slope until emerging in the basement of a disused tenement building. Scouting ahead they discover a robbery in progress. A series of Jokers are involved in attempting to break into the Amalgamated Bank about two blocks from the Port. They have removed bricks and are in the process of cutting into the vault proper when they are disturbed by the unexpected arrival of the party.

Following the attack by the alligators, the party continues to push on through the tunnel complex looking for an exit point. It is pitch black, difficult to breathe, difficult to move except in a crouch and the walls are narrow, covered in slime and the sludge masks hazardous footing. It is extremely hot and unpleasant and progress is slow. Sound echoes strangely around the tunnels and they appear to be restricted to a single level absent of any way up.

After the better part of an hour, a distant light source can be detected. Emerging from the pipe into what appears to be an old railway tunnel the group see a faded sign hanging under an old battered lamp fixed to the side of the wall. To the left it reads: “Port” and to the right “Carnivale”.