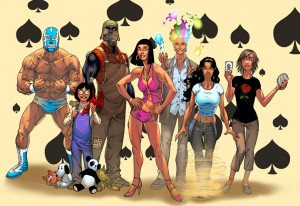 There can be no game without it being populated by the Players and their respective Player Characters.

That said, there are certain base requirements that everyone is expected to follow:

Start with a character concept. Flesh out the powers you would like and their limitations. If you feel up to creating the game mechanics to support it – please jump right in – this is a relatively steep learning curve for most of us so we will all make mistakes to start with but that is no excuse not to start.